4 Months Already (my ramblings about Elias)

I'm finding it hard to believe, but my little baby is already 4 months today. I know it's clique but it really seems like he's grown up super fast (or maybe that's cause he never was little). He is far and away, the nicest baby I've ever had the pleasure of kissing and loving on. He started out a little rocky for the first few weeks when he didn't like to go to sleep til about midnight, but he's calmed down now. 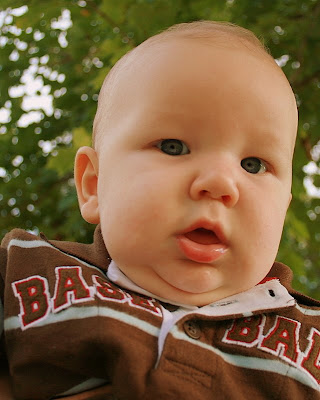 We discovered, out of necessity and since he's the third kid, that he can put himself to sleep like a dream. About 3 weeks ago our normal methods of getting him to sleep (rocking, walking, nursing) didn't work so we started just laying him down and lo and behold, he fell asleep. We lay him on his belly and he grunts and sucks his hands and the sheet for about 3 seconds, then he's out. I can't believe how simple it is and how nice it is. He sleeps great too, for about 6-7 hours, then wakes to nurse then back out for about 5-6 hours. I always thought Ava was a good sleeper and Nathan was a horrible one, but Lias has shown me just what a great sleeper is. I absolutely love cuddling him and kissing his fat little hands while he's nursing at night. 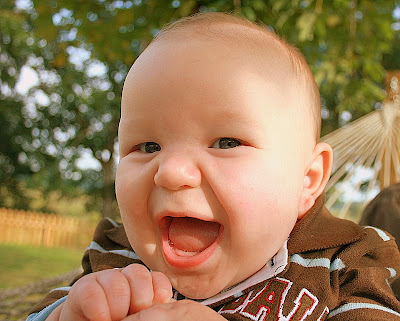 He's also the giggliest baby I've seen. When he was only a day old he was sleeping and started giggling in his sleep. I thought that was awfully cute but weird for a newborn but he did it quite frequently and still does. When I go in to get him from his naps he giggles and squirms on his belly till I pick him up. We haven't been able to nail down what he likes to laugh at since it changes daily but currently his favorites are: John playing the guitar, Ava telling stories, me bouncing him on my knees and going over a bump in the road in the car. He giggled like crazy the other day on a windy road out here and it was too cute. 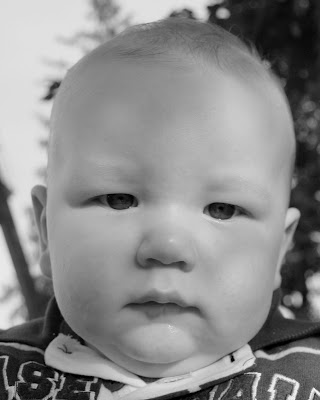 Anyway, he's a great baby and I'm loving every minute of him. For some reason, I don't feel rushed or annoyed by being tied down with a baby like I have at times with the other two. I can only guess that I've finally been broken - I like to equate motherhood to breaking a horse and for the past two kids I've still been known to buck and trying to get the saddle off my back occasionally. Now, if he doesn't sleep at a certain time - oh well, there's already 2 others awake too so it's not like he's much harder. Maybe this is how people end up with 6,7,8 kids. Not that that's happening over here. I'm just loving this one I have and thought I'd write it down for his sake when he's a horrible teenager.