The Tale of the Green Ring 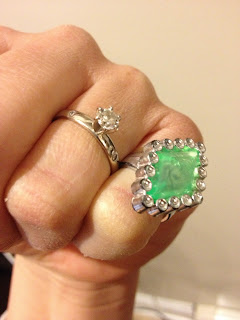 Once upon a time there was a little boy that loved his mama so much. Everyday he would tell her he loved her and do little nice things for her, like get her shoes whenever she asked or jump up quickly to clean whenever she asked. The little boy grew older and soon it was time for him to start school again, this time in the 1st grade. This made the little boy anxious and nervous to be gone from his mama for so long, but he tried to be brave and do exactly what the teachers asked of him. Each day he listened so well that he would be rewarded with a special penny to put into his penny cup. As the days went on, his pennies grew and grew until soon he had enough to pick a treasure from the very special treasure box that his teacher presented every Friday to anyone who had earned enough pennies during that week. He dug through the treasure box, tempted by the fancy pencils and silly putty, but looking for just the right thing. At last, he saw it: a beautiful shiny ring and in his favorite color, GREEN!! Bursting with excitement, he turned over all his pennies, snatched it up and rushed home. eager to show his mama his treasure. He bounced off the bus, tore open his bookbag and proudly showed it off.

But his mama was busy looking through all his papers from school and cleaning up the kitchen and didn't really notice his beautiful new ring. "Besides" she asked him, "Are you sure you wanted a ring? Didn't the teacher have any toys for little boys?" so the little boy set the ring down on the counter and went off disappointedly to play with his little brother. Maybe his ring wasn't so fancy after all.

That evening after dinner, while the little boy's mama was wiping off the counters, she found the ring again. It was a pretty ring but she was so confused why the little boy wanted a ring since normally he didn't like any type of jewelry. She walked over to the little boy who was playing on the computer and asked him again, "Why did you pick this for your treasure?" The little boy stop playing the game, turned to his mama and said, "I saved all my pennies for 3 weeks so I could pick out a fancy treasure. I got that pretty green ring since I thought you would like it!"

His mama put down her cloth, gave him a hug and told him thank you and that she loved the ring. Then she put it on her finger but it was too small. Since it was made for a little child's finger she took off her necklace, slipped it onto the chain, and wore it around proudly so she could remember just how much the little boy loved his mama, especially when she missed him while he was at school during the day. And the little boy thought she looked like the prettiest mama in the whole world. The end. 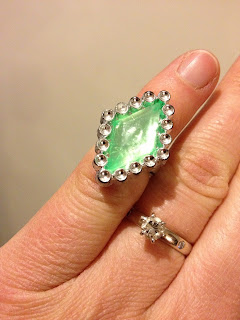