We're trying to get more into the yard and garden stuff now that we've been in the house for almost 2 years. Well, I should correct myself- John's getting more into the yard and garden stuff and I'm huffing and puffing along behind trying to give my opinion but not willing to actually do much. Though I must admit that a baby on the hip or in the belly doesn't really make for a great gardener.

Last fall we actually thought about putting a few flowers in before it got too late, and this spring we were rewarded with about 20 beautiful white tulips in front of our brown barn. Ava thought they were pretty cool and had fun posing in front of them. 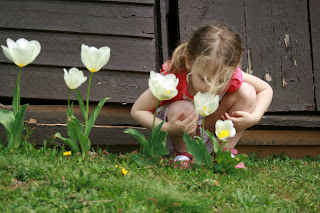 Here is the normal Ava we all know and love- shaggy hair and all. 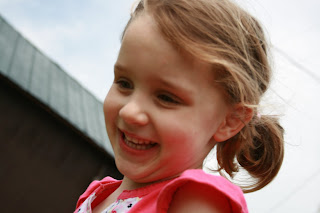 After looking at these pictures I realized that Ava really needed a hair cut so off we went to the local cosmetology school, where she got a fancy new hair cut. She loves it because it doesn't get any "knotties" or tangles and she can brush it herself. I love it because I don't have to fight her on fixing her hair anymore and it's out of her face. Win-win! 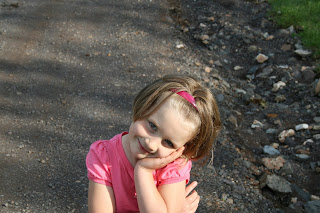 Meanwhile, what does one naughty little boy do while his mom is having fun doing girlie things with his sister? Why, make messes of course.

And my thanks for letting him have this fun?

A dirty, twerpy look when I told him we were through. My nice little toddler is morphing into a naughty 2 year with an extensive vocabulary overnight. I'm just glad I only have 3 more weeks until this next baby comes out because Nathan's to the point that I have to physically remove him from situations and he's quite a brute.