So today we came home from church to find the horses fighting and sure enough, who was in the middle of it but Carlos, the big dumb horse who doesn't know enough to stay away from the mares. This is the third time that it's been the mares "time of the month" which makes Carlos a little wild and crazy. (These pictures are from last winter- not May in Virginia!) 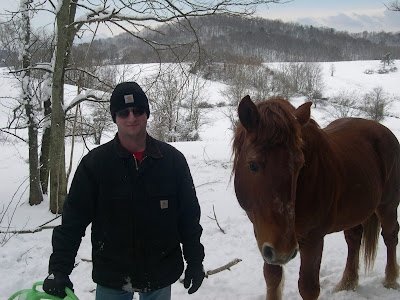 This time he broke down two wooden gates to get to them and John, to put it mildly, was NOT HAPPY. Each time Carlos gets out or does something dumb (which seems to be happening frequently) John marches into the kitchen and announces to me, great with child and usually in the middle of making dinner, that I "have to do something with that horse or he's getting rid of it". I've learned to just listen quietly as he raves, then I usually catch Carlos and things move on.

But today I think he might have reached his limit and so we're now in the dilemma of trying to figure out what to do with a naughty horse who is too big for his britches and who we just bought a very fancy cart to use him with. 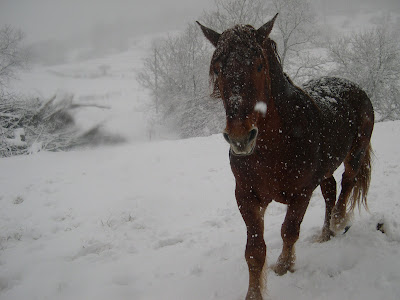 Our options are: sell him, breed him to another horse and keep the other horse and baby and sell him, or geld him (remove his boy parts in the hopes that he would forget what fun it is to court those mares- this probably wouldn't work anyway, since he's 15 and isn't likely to forget easily). So I'll keep you updated on what actually happens but let's hope it's a happy outcome. Remind me again- why do I have a horse when I have (almost) three kids under the age of 4? Yeah, that's what I thought.
Posted by Lynnie at 7:06 PM