Walking with my baby down by the San Francisco Bay (Part 2)...

While I was off singing about ribbons, er, whoops, I mean flowers, in your hair - John, on the other hand, was jamming to the song about the San Francisco Bay Blues.  Either way, there was a bunch of talk about ole' San Fran, especially for a family that is all the way on the other side of the continent from it.

We've actually done quite a few big cities as a family now and I think we have it down to a science. Come into the city halfway through the day, Priceline a hotel as close to the sites as possible so little feet don't have to walk forever, stay one night and hit all the major sites. We've found that this technique lets us get the flavor of a city, especially if we can come back and chill as needed and then head back out in the evenings. So in 36 hours, we saw a ton of the city. Here's a quick recap!! 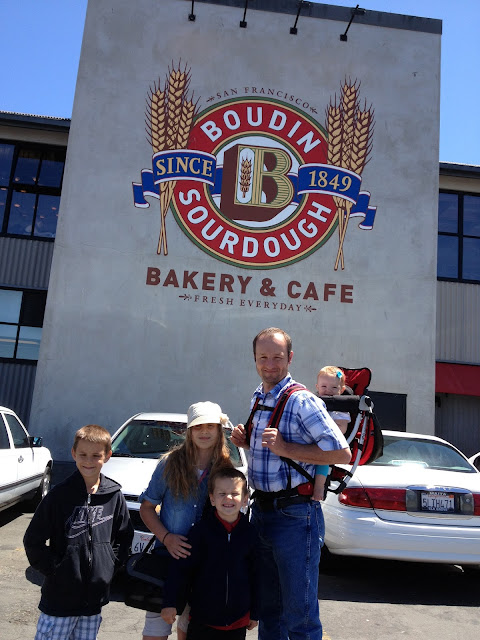 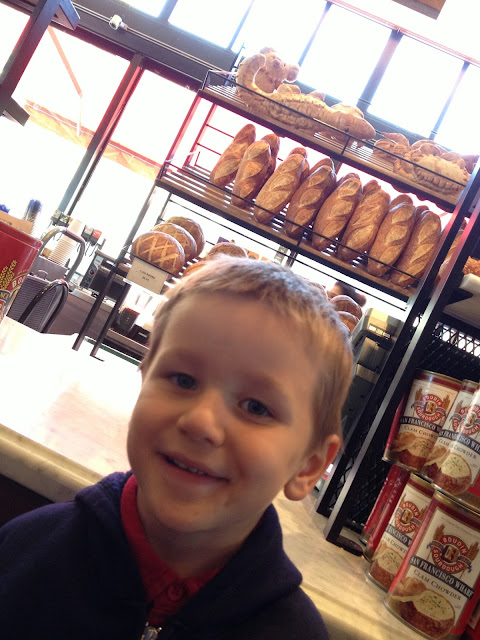 Boudin Sourdough factory: Saw lots of cool animal shaped breads, whipped through the line, bought 3 loaves of sourdough and sat on Pier 39 and ate almost every bite of it. Shared a little with the pigeons, much to Nathan's chagrin (he's an extreme rule follower and the signs said "Don't Feed the Birds"!!!). Liked it decently but decided the corner store in Sperryville (4 miles away) was about as good, if not better than San Fransisco's (3000 miles away). 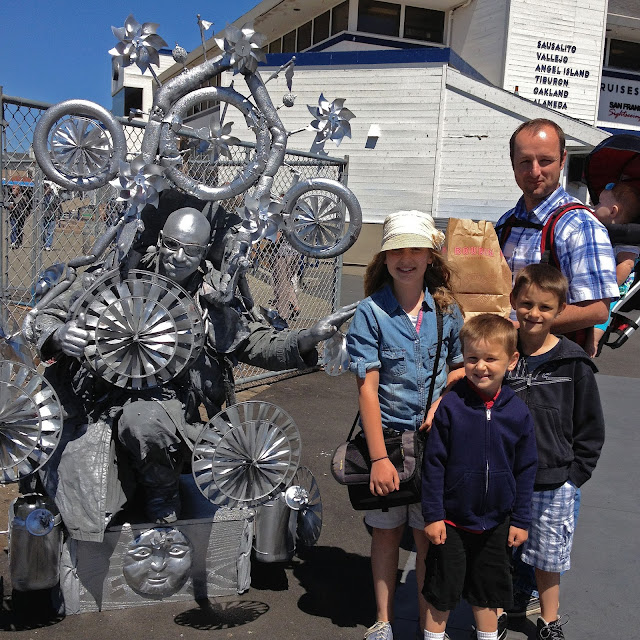 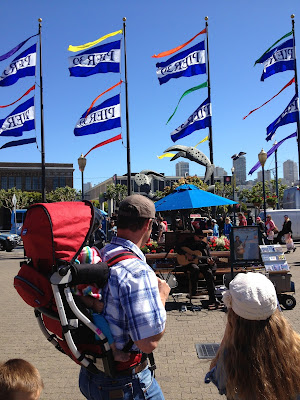 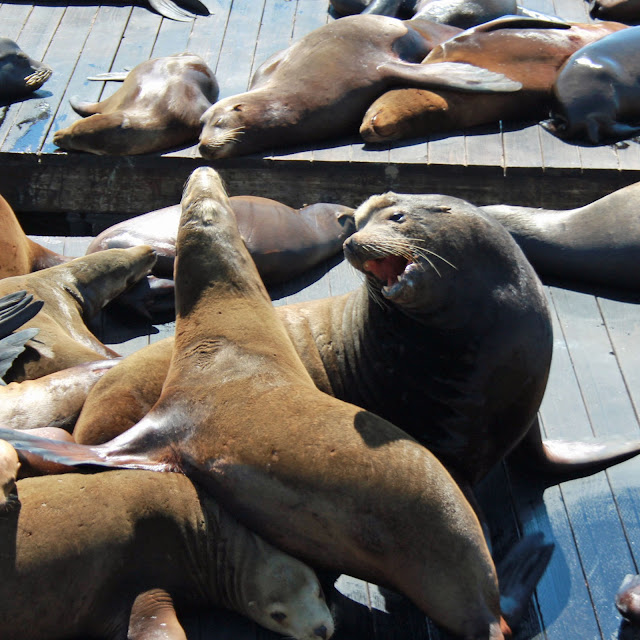 Pier 39: Were entertained by the weird exhibits (metal man, sword eater clown, beggars) up and down the Pier, tons of shops that we looked in the windows, and saw and smelled the sea lions of Pier 39. Actually, they were pretty cool but the crowds and the smells were pretty bad. Now we can check that off our list of things to do in life!! 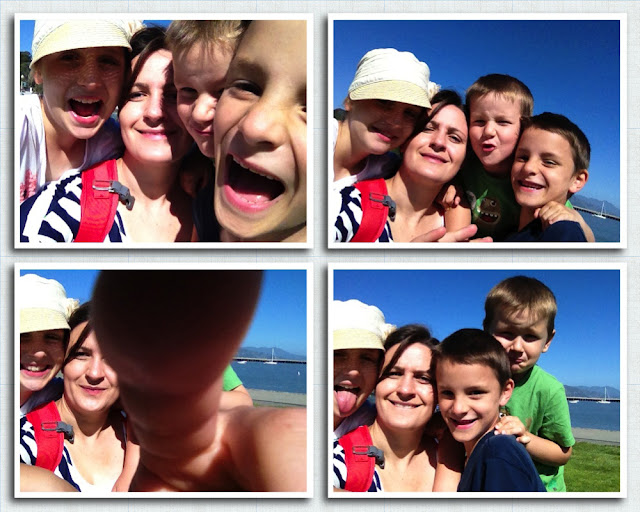 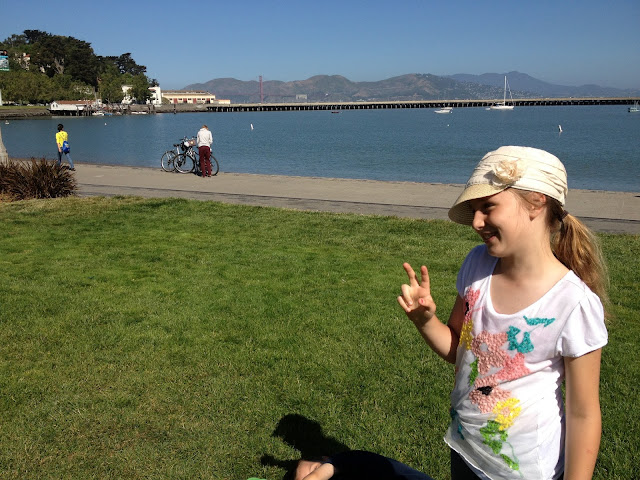 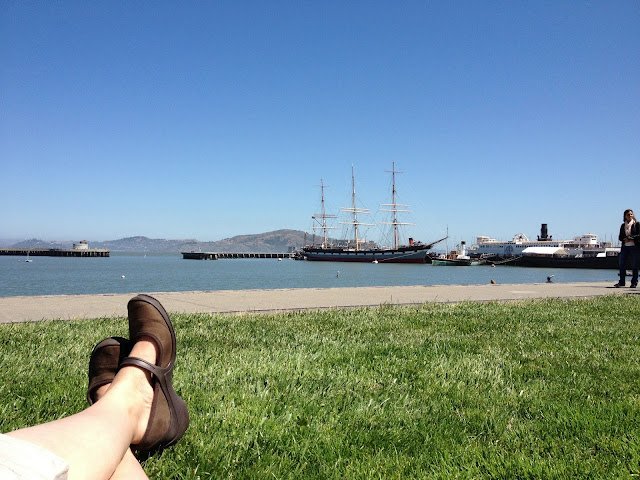 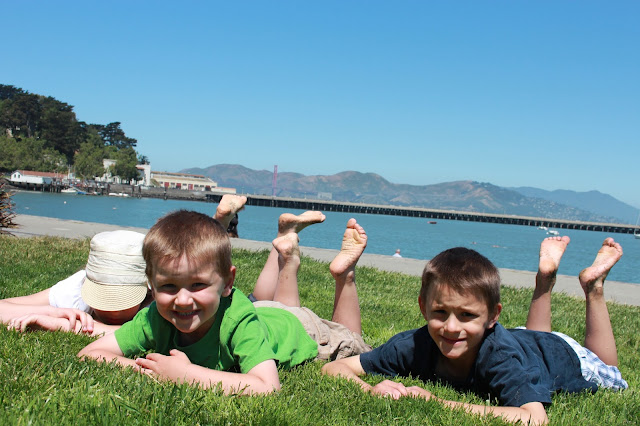 Aquatic Park: After walking forever on Pier 39 and Fisherman's Wharf, we ended up at the end by a cute little park/beach area. This was definitely one of the kids favorite places and only about 3 blocks from our hotel, so we ended up coming back here 3xs in 24 hours. Cool place to wade and see the Golden Gate Bridge from afar (which is all we ended up seeing it at all. Elias was pretty sad about that - when we were driving out of the city he kept saying, "But we didn't see the Bridge!! But we didn't see the Bridge!!). 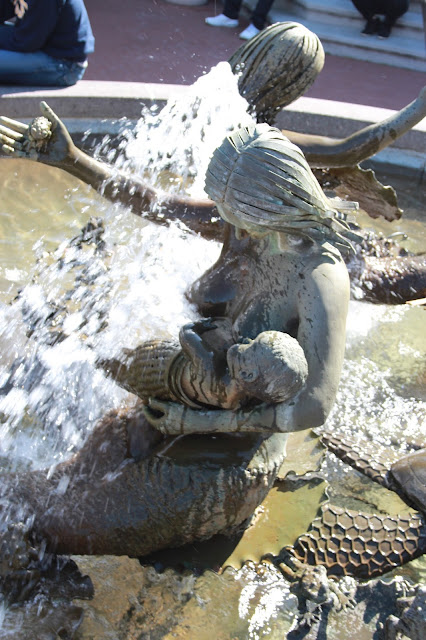 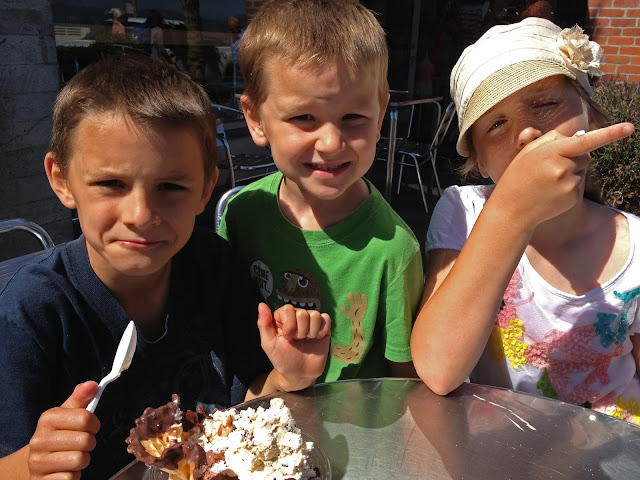 Ghirardelli Square: We sent John back to the hotel to give Adele a nap and we all went searching for this famous chocolate factory that was so hyped up in the brochures. Short story - it's closed, for repairs or something so we tried to make the best of it by buying the ice cream. We weren't that impressed for $7.00 and decided we could do as good at home. But I did see this cool statue of a breastfeeding mermaid!! 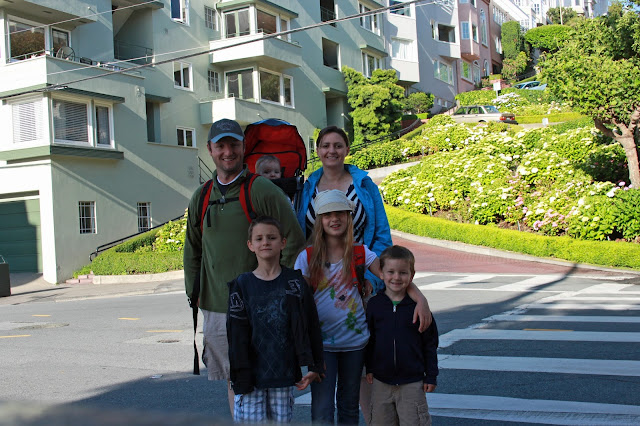 When I was a little kid, somewhere between 4-7 years old, we visited San Francisco en route to living in Japan and all I can remember is driving on this windy road. 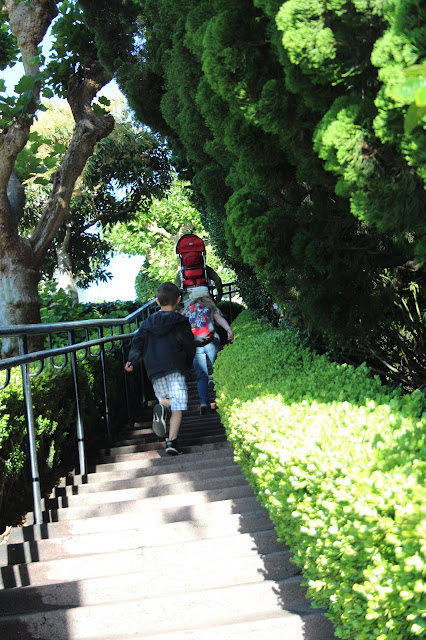 So it was a must while we were here. Luckily, our hotel was only 2 or 3 steep blocks away from it so early one morning John forced me out of bed and we hiked up to the windiest road in the world. 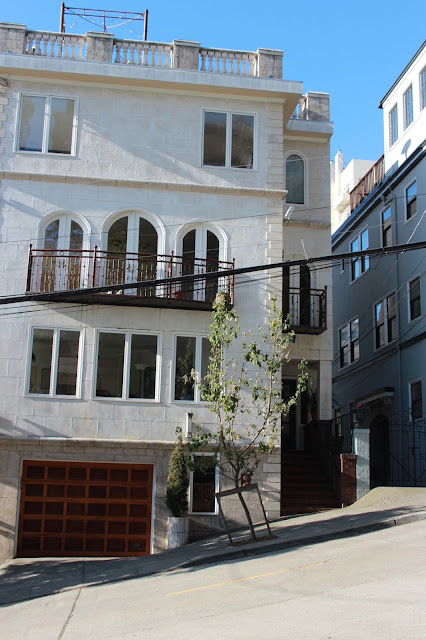 Even the poor trees are so confused on this street. They want to grow straight up but life just doesn't want to let them. 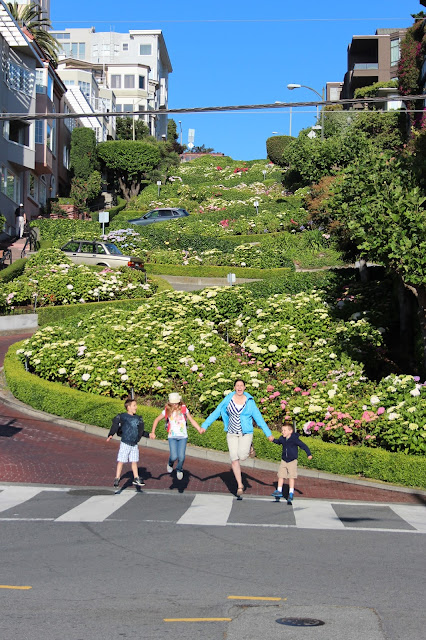 The hydrangeas along it were in full bloom and it was pretty darn cool to see, even if it was a hike. But at the top of the hill we were rewarded with views like this. 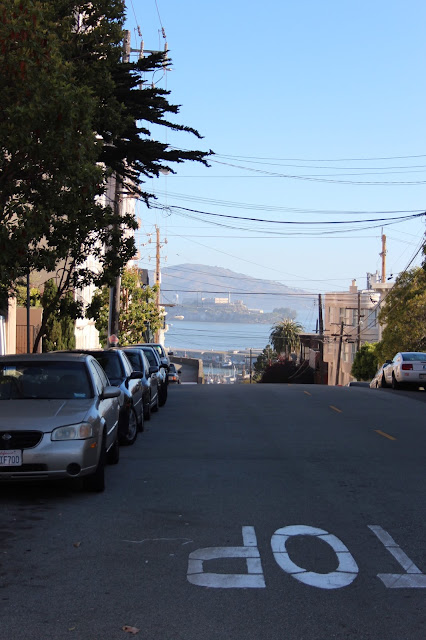 That's Alcatraz in the distance and, unfortunately, we didn't have time or desire to spend upwards of $75 to take our crew there. So we just looked for now… have to leave something to come back to see someday!! 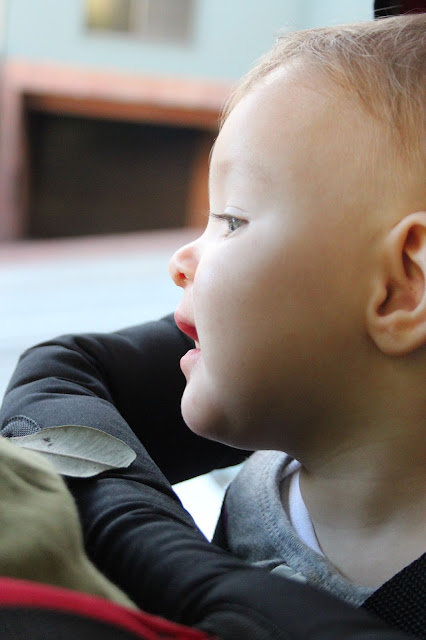 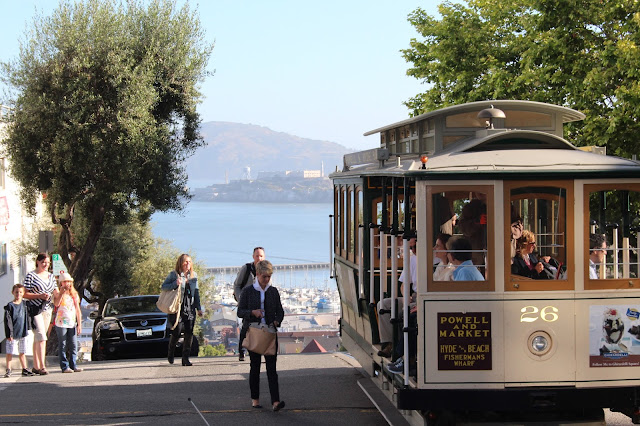 We also didn't get a chance to ride these, although we admired them a bunch. They looked really fun but we didn't really need to go anywhere they were going and were too cheap to pay $6 per person, each way for the experience. Kinda sad we didn't ride them now but at least we got some cool pictures! 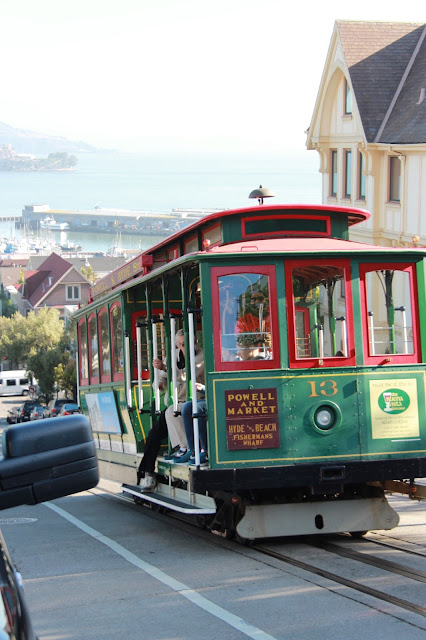 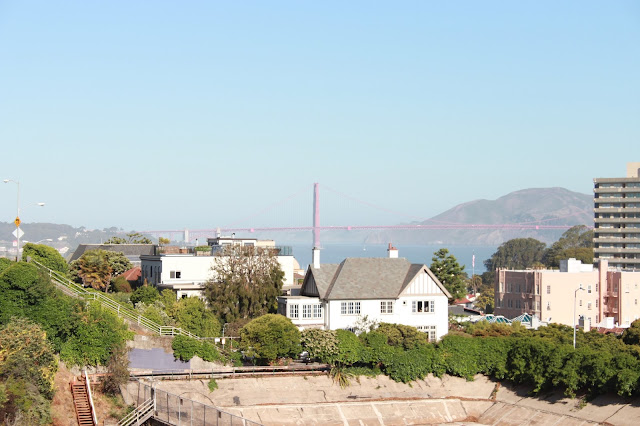 Along the walk back to Aquatic Park from Lombard Street, we found this empty lot with lots of concrete and a great view of the Golden Gate bridge.  Which was a good thing since we never quite made it over there to see the thing in person. After waiting almost an hour to get into the city over the Bay Bridge we decided we might not have the energy to leave until we were sure we didn't want to come back!! 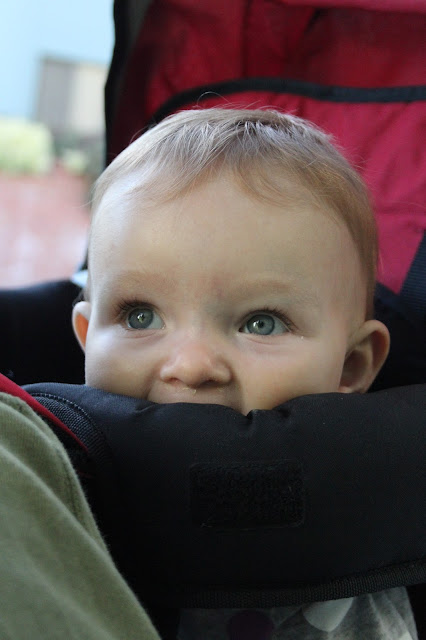 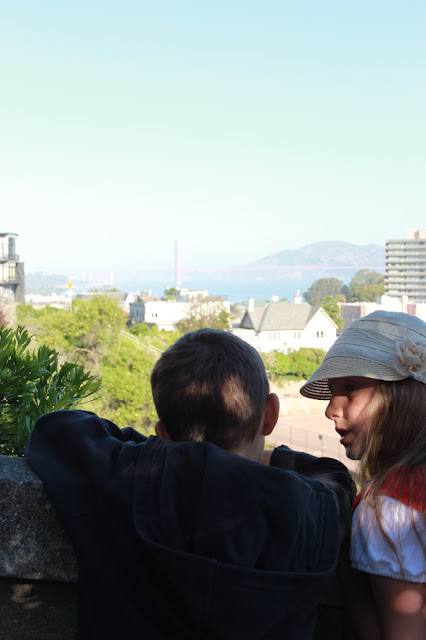 Ava and Nathan contemplated whether or not people could skateboard in that concrete jungle and why it was there in the middle of the city.  Not sure what it is they finally figured out. 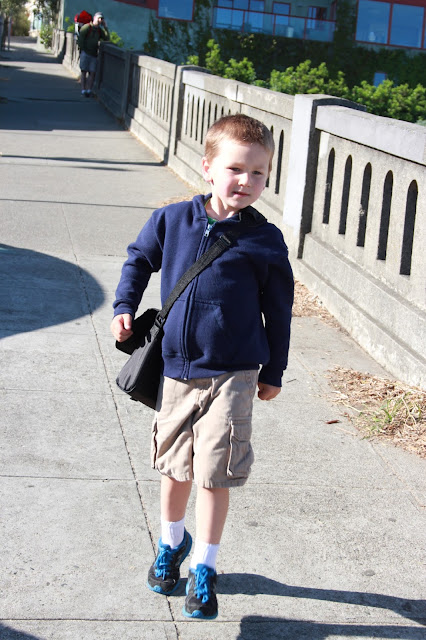 And last but not least, Elias learned to bounce down the streets of the city, carrying a messenger bag and looking like he owned the place.
We ♥ SF!!