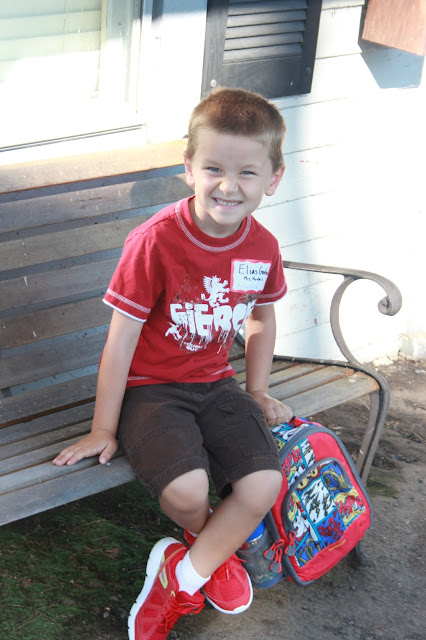 So somebody very little (with a very big attitude) starts school this fall. And it's no easier the third time around, no matter what people say. It's killing me each time I think about him not being here this fall to help me entertain Adele and to be a punk to me when I ask him what he wants for lunch. 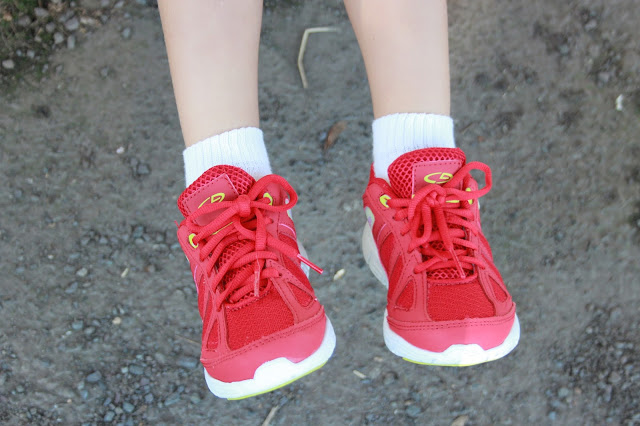 Last night he claimed he was not going to kindergarten and "No, he wasn't" going to ride the bus today and pack a snack this morning and go to this bonus trial run of week of kindergarten known around here as Jump Start Kindergarten. I never really know how he's gonna react to things - he can be the easiest going guy but if he gets his mind that somethings not happening there's not much anybody can do to turn him around. Luckily, these smoking hot clearance red shoes from Target helped convince him to get dressed this morning and it was smooth sailing from there. 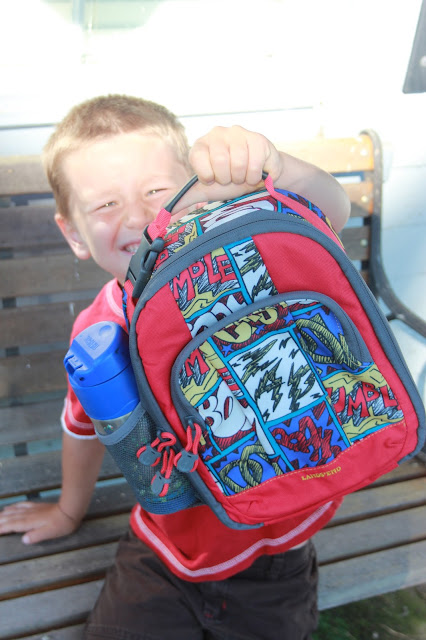 He also sported a new lunch box and thought it was pretty cool that he got to finally pick out some of the yummy snacky things that Ava and Nathan have been taking for lunch for the past few years. Did I mention that this little boy loves the color red??  At least that he can make up his mind about. 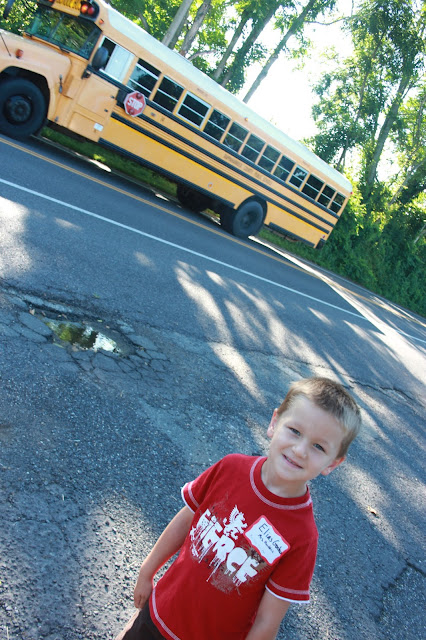 I was busy talking to the other moms at the bus stop and didn't realize the bus was coming so quickly so I had no time to be sentimental when it showed up. Which is really good, cause I've already had a few breakdown days about him starting school. I don't think it's really that fact that he's big enough to go to school, but more the fact that all 3 kids are now going to be gone more than they are home. It still feels so wrong to send more of my family away for more of their waking hours then they are home…. but I can't figure out any other alternative so I'm trying to come to grips with it. 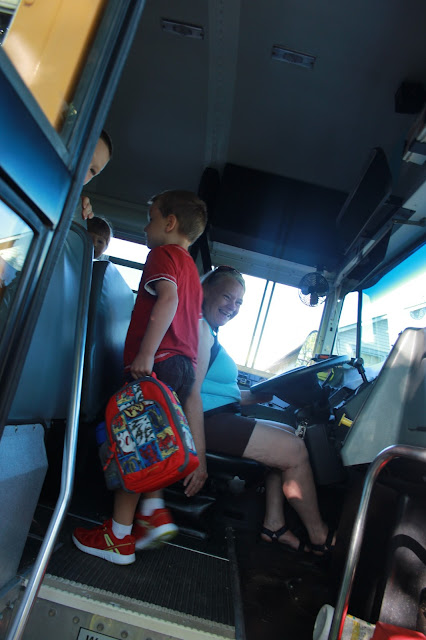 No time to even look back. By the way, can I tell you how nice it is to live in a tiny community?? I was starting to get sad as I tried to get him to kiss me goodbye and then I realized, "Hey, I know this bus driver!" Turns out, she's a great friend's mom and I've chatted with her probably a half dozen times. It's so reassuring to know that he's in not just safe hands, but familiar ones too! 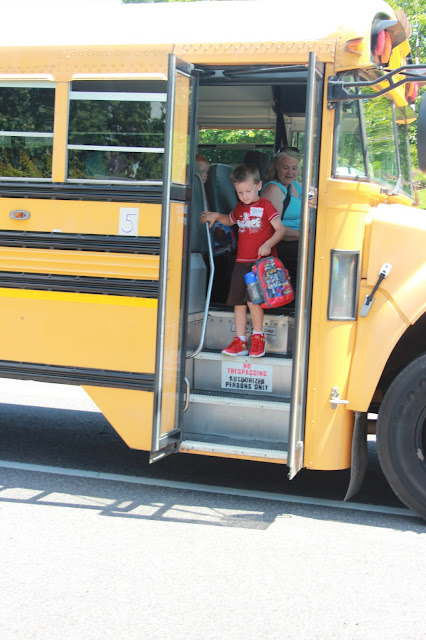 And then, just like that… he's back. It's only a 3 hour day but I, of course, had all kinds of things I thought I'd get done without him and Nathan fighting. None of that happened and then it was time to pick him up.  I love that he needs to use the handrail and that he still has to take the steps shuffling down with two steps.


It was one of my favorite parts of preschool, watching him eagerly try to go bound down the stairs to his classroom but seeing how little he really was since he couldn't even take the steps like a big kid. Awwwwhhhhh!!! 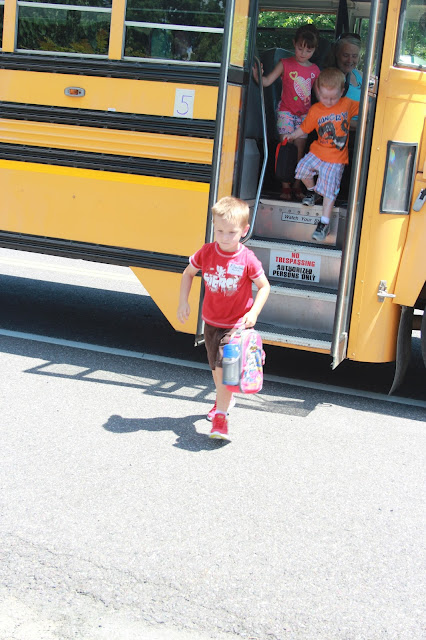 He's all seriousnes and seriously, doesn't this kid look like a stud?? I could dedicate a whole post (and maybe someday I will) to this kids fashion sense but today I talked him into a semi matching outfit. Let's see what tomorrow brings. 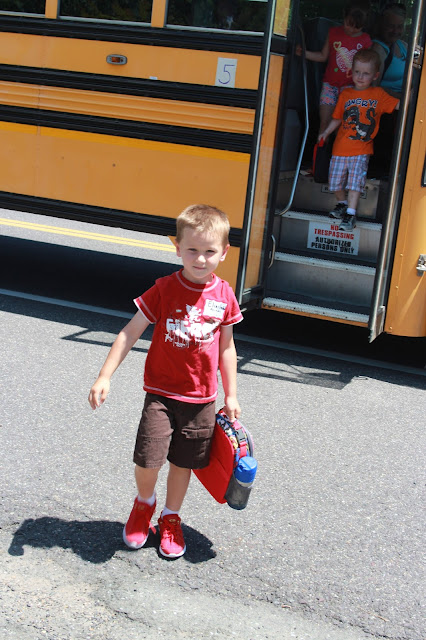 Cause honestly, he may wake up tomorrow and tell me he's absolutely not going back. Fool me once, shame on you… did I mention he's stubborn and totally inflexible sometimes? So tomorrow I may be driving back home with all four, watching that bus drive away with a little boy scowling in the backseat of the van, refusing to talk or make any rational sense.  Which would be just fine with me cause he still has at least another 3 weeks to be my little sidekick here at home before the big bad world of kindergarten eats him up.
Posted by Lynnie at 9:25 PM