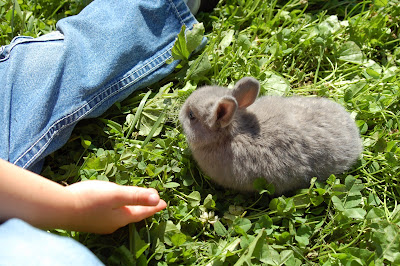 Whoa, where have the past three weeks gone?
To the rabbits and the chickens and the goat babies and my own few babies and John's boats with the boyscouts and to a busy life for John of wearing a suit to church each week and me being a sacrament meeting widow. Whew, no wonder we're a little tired. But for my story of easy come easy go...

We've learned that it's as easy to get out of the rabbit business as it is to get into it. Within one week about a month ago we were unexpectedly gifted with 14 rabbit babies and within the past week we have unexpectedly been relieved of 7 of those rabbits. Yes, this is another sad tale of woe and misery and blood and horror. You can stop reading now if you still want to remain in awe over our luck and fortune to have so many cute adorable bunnies to play with on our idylic little farm. 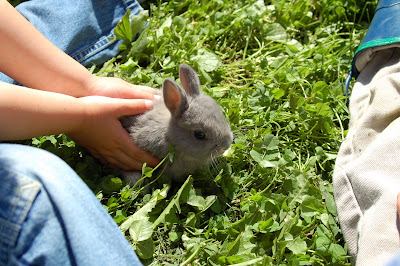 Last Friday we set up a little make shift hutch in the yard for our "buck" rabbit and its 4 babies that had made it to that stage. Her and her family had been living in a dog crate in the garage and couldn't see the light of day or eat the clover and we were feeling bad for them living in their squalor. So we set up a chicken wire cage outside in the yard with a few pieces of heavy wood on top of them, with the intention of bring them in during the nights. We remembered the first night and forgot the second and that was our fatal mistake. During the night the lovely dog that lives at our house tore apart the cage and, once again, wreaked havoc and carnage across the backyard. It was the final straw for me. Every time I walk past her now I kick her if I can and refuse to give her the time of day. This, coupled with her last 15 animal slaughters and the fact that she nipped at Ava the other day, have done her in in my book. I realize that I should not have left the rabbits out over night but it still doesn't make me feel any sympathy for this dog. John is up a creek because he really can't work the goats without her but I believe he is looking for a replacement in the near future. In the meantime she's kenneled whenever anyone comes over and hated by me all the time. So ends the story of the buck that wasn't a buck after all and it's adorable babies that had just opened their eyes and could fit in the palm of your hand. And sadly, I never even got a picture of these babies or their mother.


Next sad story. Two nights ago John and the kids decided to finish the door on the original (dog proof) rabbit hutch that we have the other mother and her surviving 4 babies in out in our yard. It's a great sturdy hutch that lets them eat clover as we drag it around the yard each day. This mother is the original mother that came with the original 4 babies (of which none died! yeah!) and she's a great mom. She has raised 8 babies in the past 2 months now and if she has one fault, it's that she's a little too defensive of them. We haven't handled her at all since this second set of babies was born a little over 4 weeks ago, so she's gotten pretty wild. I came out that night to see Ava in the cage with her, petting her and laying next to her while John drilled the door in. I thought that was pretty amazing since she's actually tried to bite us a few times but didn't think too much of it till Ava got out of the cage and she still didn't move. We had given her a bunch of extra lettuce that she snarfed down but I thought she looked a little sickly and started watching her. All of the sudden, she started convulsing, eyes rolling and gasping for breath and yep, within 3 minutes she was dead. DEAD. We all (Ava, Nathan and Lias too) stood there shocked. Could we possibly have more bad luck with these rabbits? After a little googling, we found out that rabbits can actually be scared to death and the only things we can figure is that between the drill and Ava touching her we killed her. 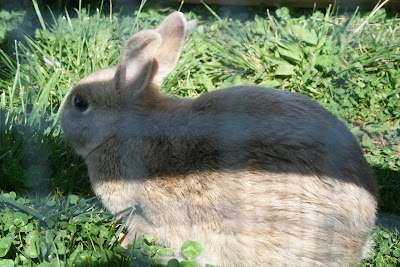 She left behind 4 little babies that are just at the brink of being able to survive on their own so we'll see how they do. They do NOT like the fake milk replacer we tried on them so hopefully they're able to get enough from the grass. Time will tell.

So moral of the story: Easy Come, Easy Go (and we really stink at keeping rabbits alive)

(Up next - Nathan's fishing, tractor riding, bonfire birthday and not one word about rabbits, I promise)
Posted by Lynnie at 8:58 PM