(Am I the only one who has that song by the Bare Naked Ladies running through their head every time someone says something about China Town?? If so, then just disregard this statement and read on about our adventures in China Town…. ) 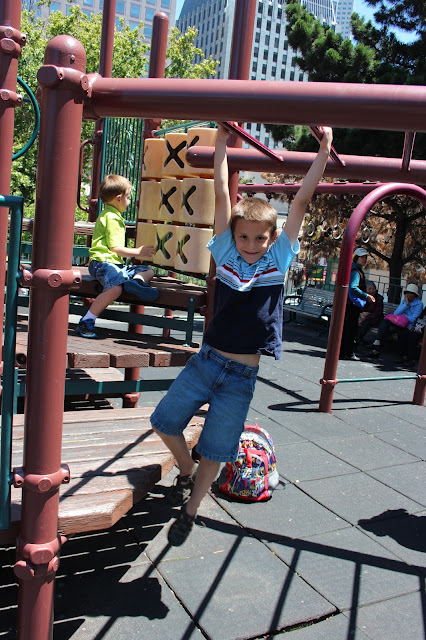 After hooking up with Jeff and Andrew, who had driven up from Southern CA to hangout with us in San Fran, we all headed out to see China Town.  We started off in a playground that, oddly enough, had no children playing but almost at least 100 old Chinese grandmas and grandpas playing cards and checkers. I almost asked if Nathan could join in on a game since he's into checkers currently, but I think there was money involved in all the games. I wanted to take pictures but wasn't sure if that would get us killed so decided against it. You'll either have to take my word for this or go visit China Town sometime. I think we disturbed the peace by letting our kids actually "play" on the playground. 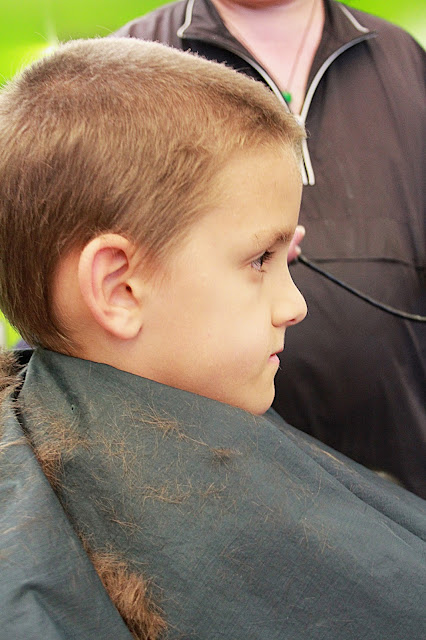 Then John spied a barber shop that had haircuts for only $5 so we marched in all the boys for a trim. Isn't that what everyone does on their vacations to Chinatown? John and I were quite pleased with the cuts but Nathan and Elias…not so much. Although I can't say it was the barbers fault since the boys in general hate to have their hair cut. 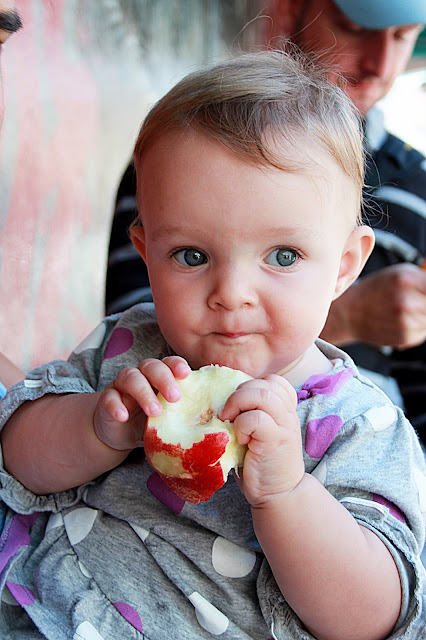 Two stores down from the haircuts was a produce store that sold all kinds of interesting fruits. We stuck with the familiar kinds and came out with delicious nectarines and cherries, which we proceeded to eat right there on the street. 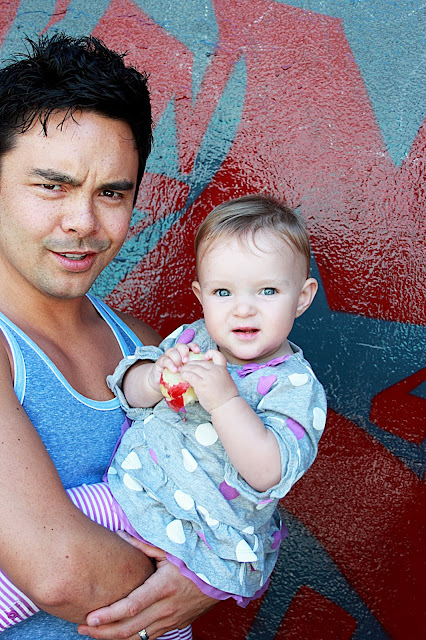 Andrew and Adele look a little puzzled why that would seem strange to anyone else. We promise we washed it first with our water bottles and we didn't litter at all. Although you wouldn't have been able to tell since the whole area was quite covered with garbage. 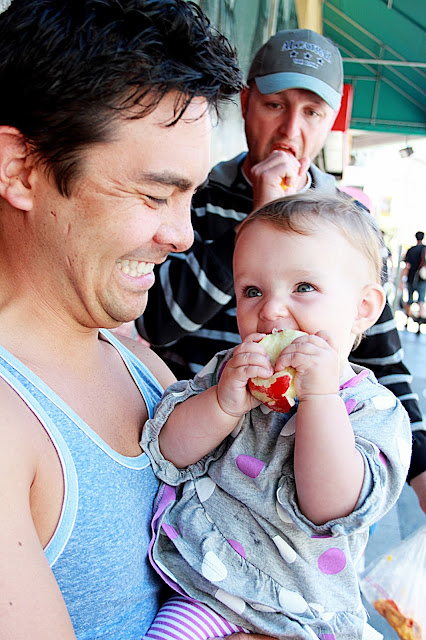 They just know that it was yummy fruit and needed to be eaten, anyway, anywhere, anytime. Yum. (Awesome photo-bomb by John in the background there.) 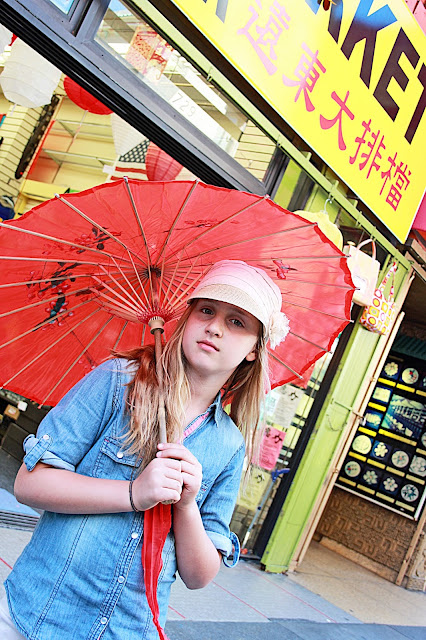 Ava went for the finer things in life and bought this beautiful, stylish red umbrella (that I really hoped would only last a few hours but, alas, it's still hanging on strong in her room). Luckily, the boys ninja swords for $4 lived up to the China Town hype and broke within a day. Whew, or we would have had a tough life.  I also found myself a cool owl necklace for $18 that has more than outlived it's worth. Adele hasn't been able to break it yet and I'm very impressed with it and glad that I followed the shopkeeper across 2 streets, down a dark alley and into the back of the shop (ok, a little embellished) to buy it from his wife's store. I'm still confused why he and his wife had 2 different stores so far apart but I really like my necklace. 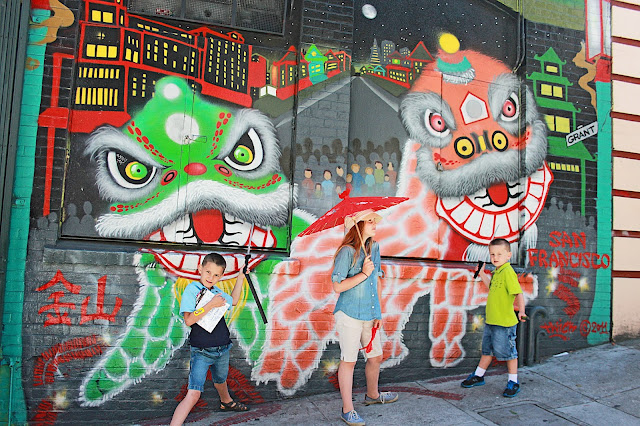 This wall screamed "TAKE A PICTURE" in front of it and so we did. If you look closely you can see the short-lived swords being brandished. 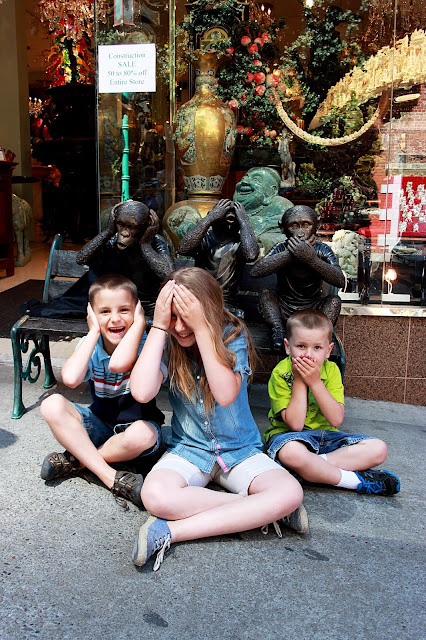 This statue was also too good to pass up so I quickly explained to the kids what they needed to do and they were good sports about it. Totally appropriate, don't you think? Now if I had only striped Adele down to her diaper and had her sit in the background for the fat Buddha. 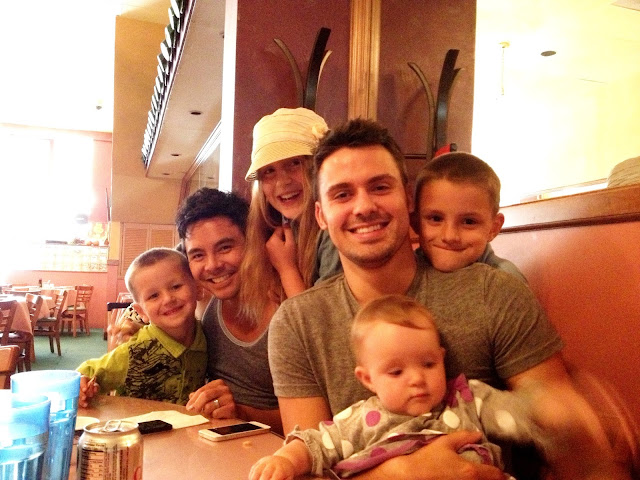 And what else would a trip to China Town be without eating at a Chinese restaurant? After a few tries, we finally found a good one (that hadn't been shut down by the health dept) and quizzed each other on the 12 Chinese animals that they always have displayed on those table cloths. Between us all, we ended up getting most of them correct. By the time the meal was over, we decided we had seen most of what San Francisco could offer us as a family with small children and left Jeff and Andrew to explore it more on their own. We headed out of town, crossing the Bay Bridge again (in less than 10 mins, compared to the 1 hour it took us to get into the city) and taking with us all the fun memories of our visit to S.F.
Posted by Lynnie at 8:37 PM