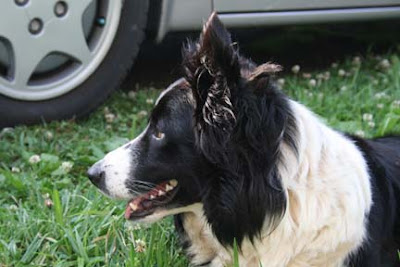 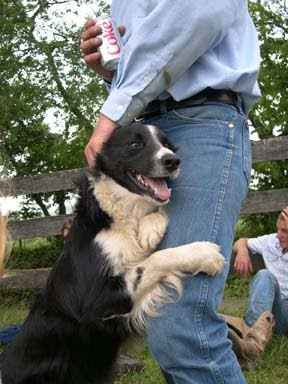 Allie - our 4.5 year old border collie - and John's loyal sidekick, companion and right hand on the farm, died Friday afternoon while chasing squirrels out in the woods. 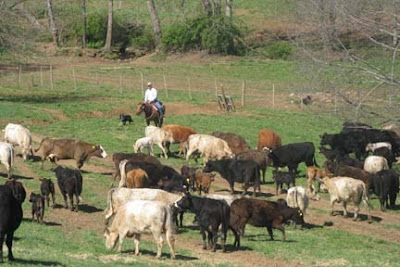 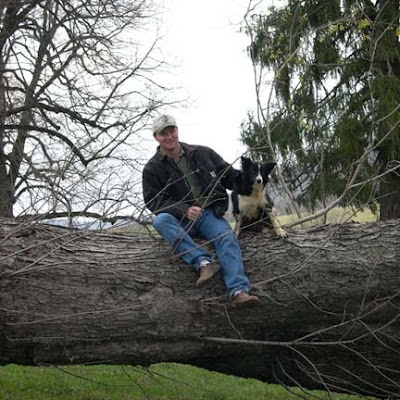 John came home from work right at 5:00pm but he called me outside and asked the kids to stay inside. He told me that he and the two dogs had been walking in the woods when Allie had a seizure. She has scared us a few times previously with these seizures but always seemed to recover. John realized this time was different and was on his way to the vet but by the time he got there he realized she was already gone. 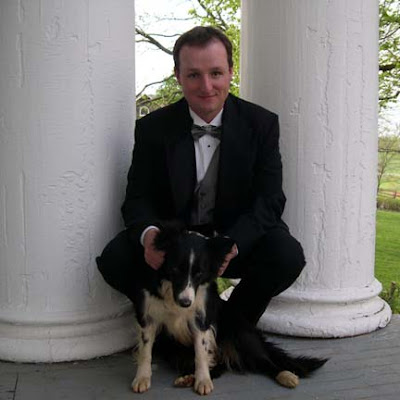 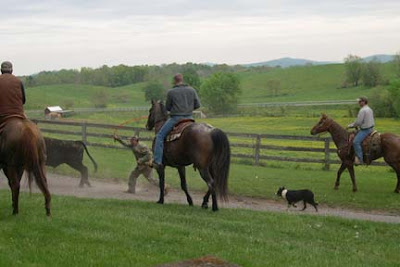 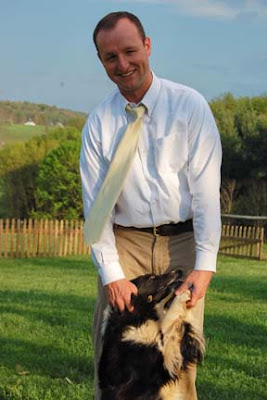 For those of you lucky enough to have visited us here, you'd have met Allie in the driveway - either begging you to throw something for her to chase or growling at you to get out of her yard. 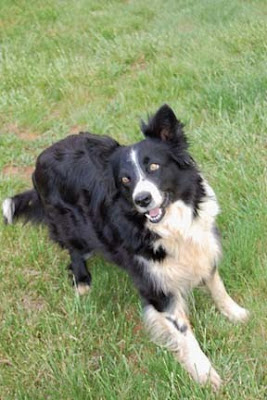 Anyone really lucky would have gotten to watch her in action - she lived to chase cows or goats or sheep or pretty much anything John asked her to do. 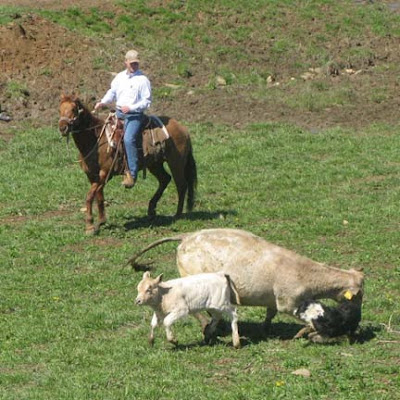 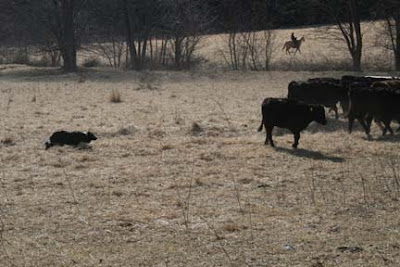 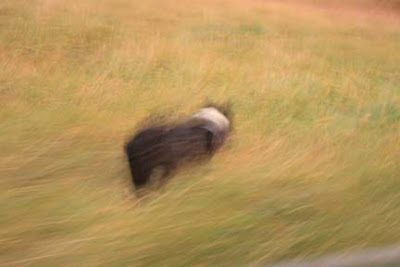 Unfortunately, all this love of chasing got her into trouble with me when she started in on my pets. But, even with all her chicken and rabbit killing and little kid nipping, I still was heartbroken to see her gone. Sometimes you take something for granted so much you don't realize they're there until they're gone. I'll miss knowing she's right outside the door, ready to growl and bark at anything that comes by, when I'm up alone late at night on the computer in the kitchen. And I'll regret that I rarely gave her a pet even though she met my car each and every time I came home. 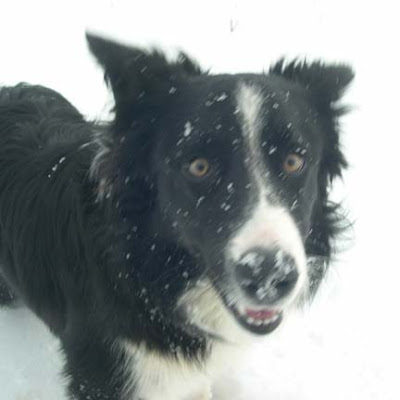 As for those little kids she nipped, they're heartbroken too. Ava and I cried and cried as John dug her grave and Nathan, who we weren't sure if he quite understood, broke down and bawled as we put the dirt over her. He claimed to be super upset that we had buried her right on a spot he thought he needed to stand, but it was so sad to watch him tear up and not be able to express why he was hurting. The next morning he asked if she was back and continues to ask if she's ever coming back. 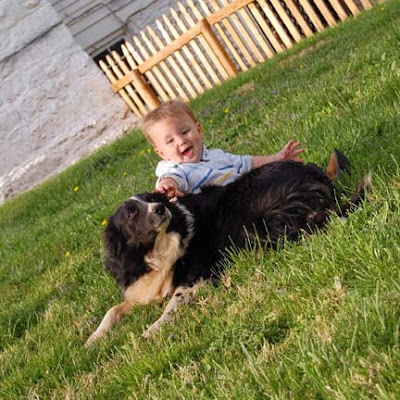 Lias waved bye-bye, showed the sign for dog and told her "nite, nite" as we laid her down. 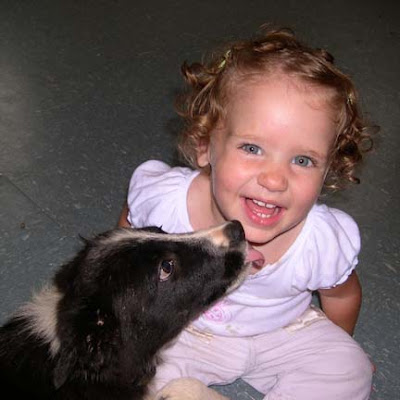 We got her the summer we moved here to Virginia. She was our first real pet as a family and Ava and Allie got into tons of mischief together their first summer, including getting Ava bit by a snake when she was 13 months old and going to visit the goats at the barn behind the house by themselves when Ava was 14 months old. 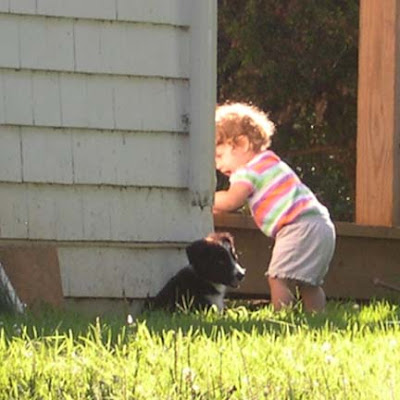 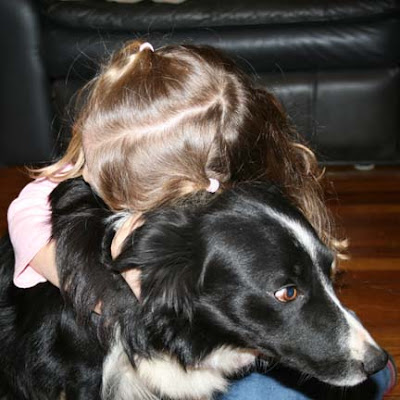 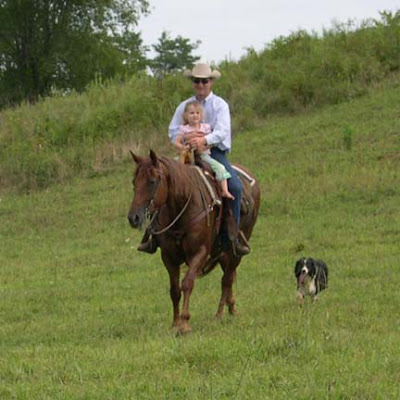 Some of our fondest memories of her are: 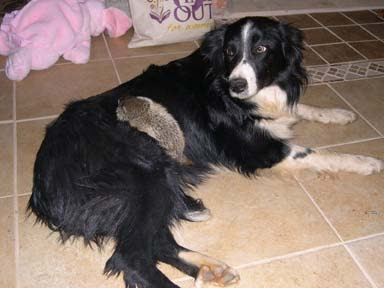 swimming in the creek whenever John threw her in, sleeping right by the back door of the garage, riding in the back of the truck, sitting out at the back fence obsessively watching the animals in the pasture, going on walks with us and splashing after rocks that we threw in the creek, mothering the baby woodchucks we tried to keep, eating all our leftovers, and terrifying the kids with her barking at skunks in the night. 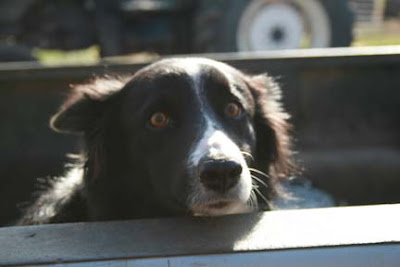 We hope there's lots of goats and cows to chase up in heaven. Nite, nite Allie - You're a good dog.