A Place to Play: Before and After

When we moved into this house, almost 3 years ago, I knew the time would come for this area to be transformed into a play area for the kids. 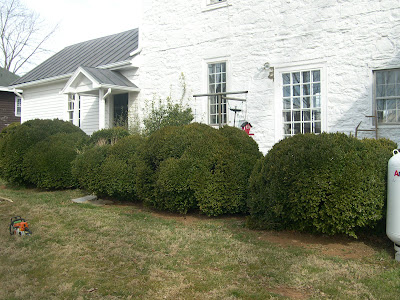 These old boxwoods knew it too, and tried to hold on as long as they could. It took about 2 years of pleading and about 15 minutes of backhoe work for them to go. As far as we can figure, there must have been a porch off the kitchen in this area but that was over 30 years ago. Until last week, it was a refuge for bugs, trash from the yard and the random bulb that bloomed behind those imposing boxwoods. 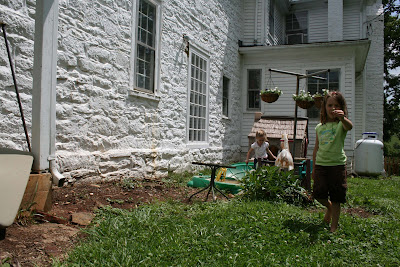 The kids still played back here but it was pretty rough. The weeds competed with the tree-that-attracts-flies (it has an official name but I can't for the life of me remember it) and Lias got covered in mud any time he went back there. 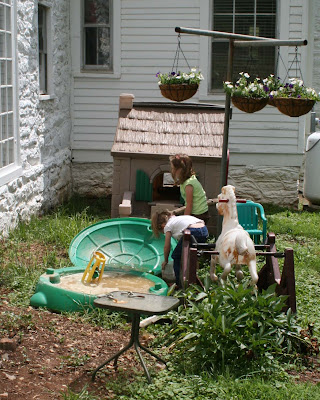 Please also note the nasty chicken waterer - sandbox that always looked like this. For some reason, the chickens thought this was their personal playground and always, always hung out in here. Probably because chickens are looking for buggy areas to dig and scratch and this worked perfectly.

The river rock started with a trickle..... 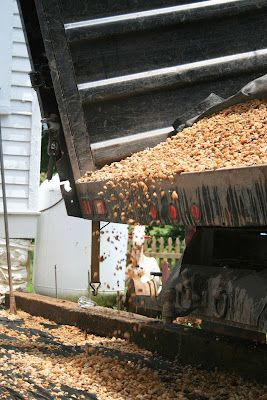 then turned into a 5 ton downpour. 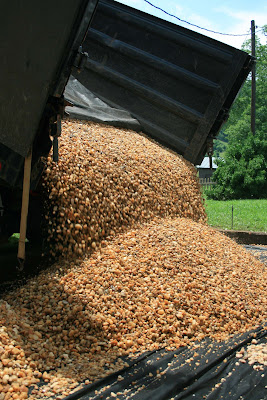 John happily spread it all around for us. 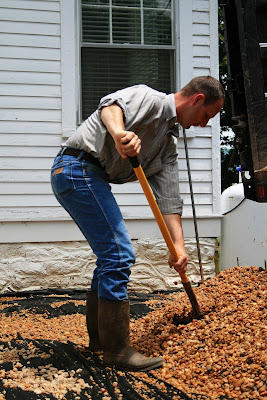 Nathan supervised from the air conditioned inside window. 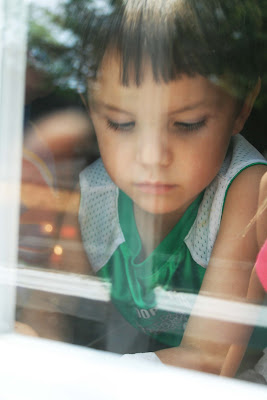 5 tons of rock is a lot to spread. For the record, I helped too and we were both pouring sweat by the time it was done. 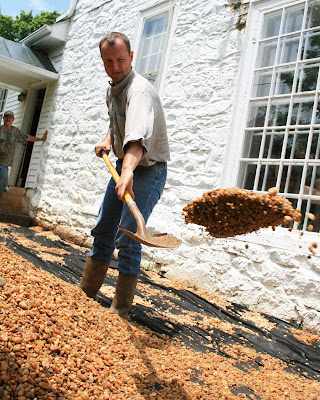 Muck boots are a way of life out here and we go through them like water. Just had to throw this picture and that fact in. 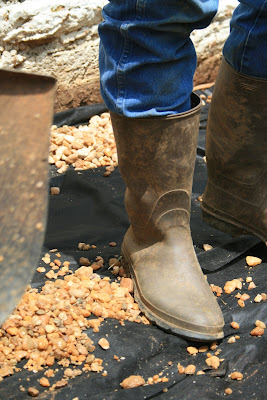 It ended up looking beautiful and being totally, totally worth it. Lias has figured out not to eat the rocks and so far we haven't had any issues with anyone throwing them. The other day I turned him loose for over an hour out here and could check on him from any of the 3 various windows that look out from the kitchen over this area. 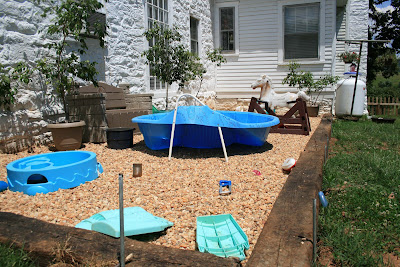 The river rock is a great area to play in - it doesn't get too hot (only in the late afternoon) and Lias can even bum scoot across it pretty well. It can't be tracked into the pool and doesn't turn muddy when it rains. All in all, I'm very happy with the backyard and so are the little people around here. 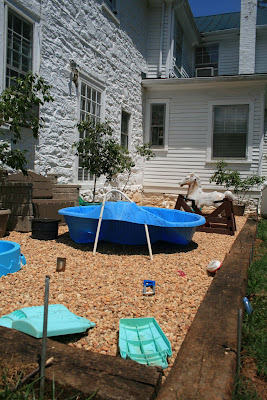 Of course, this story has a little twist to the happy ending because we live in the country and have unpredictable animals around. Here's the latest in the dog vs. chicken vs. me saga. About 3 days after we finish this beautifully clean, sanitary and kid friendly area, we started to smell something stinky. 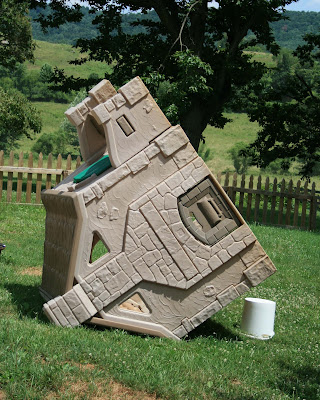 Needless to say, we haven't played in the rocks for over a week. The little house has been baking in the sun, trying to get rid of the stench. I think it's almost ready to play with again but I may never look at it the same.
Anyone wanna come play?!
Posted by Lynnie at 11:30 AM